You are a student at Hyperspace High, a prestigious school for promising young military-grade combat spacecrafts. Lately, the Vorles System has been rowdy, what with the invading armies of all-terrain killer robots and such. That’s not what’s important though. Something is tugging at your heart, and you’re certain there’s someone out there that feels it too.  It’s been awhile of lonesome time in the cosmos. Being a combat spacecraft isn’t as easy without a companion. Perhaps this year, it’s time to start a conquest for love.

Hyperspace Lover’s Conquest is a bullet hell that centers around spending time with spaceship girls amidst an invasion of hostile, all-terrain killing machines. Have fun with your date destroying pursuing robots between each wave. By working together during combat, you can form a better bond. Choose between three girls, and experience their stories in the form of an intense bullet-hell segment. Included also are boss battles, weapon changing system, companionship systems, and bombs.

Swap Weapon: C for Fast shot, V for Spread shot, B for Laser

This game was produced as a class assignment by: 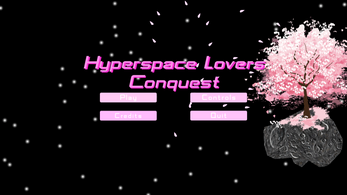 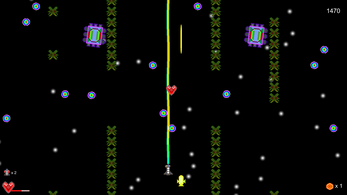